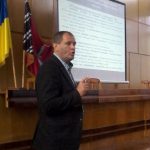 The institute for Policy Studies has completed the project on training the members of territorial election commissions. During September-October 2015 our trainers conducted 157 trainings in Volyn, Rivne, Ternopil and Khmelnytskyy oblasts. The financial support of the project was provided by IFES.

26 preliminary trained trainers of the organization who have got certificates of the International Foundation for Electoral Systems and the Central Election Commission have conducted trainings.

At the first stage of the project on September, 21-29 our trainers visited each oblast and district territorial election commission in four oblasts, covered by the project. Trainings aroused great interest and demonstrated an acute need for such projects. Elections repeatedly are held by new legislation. Moreover this time the election system is significantly changed. The participants were very interested in practical tasks, especially demonstration of the procedure of summing up and establishment of election results in multimember districts. In total more then 1200 commissioner have taken part in training.

The second stage of training was held during the first week of October. This time representatives of village territorial election commissions were trained in district centres. Over 3600 TEC members, accountants and lawyers have participated in 69 trainings.