On Saturday, May 21 our organization for the sixth time became the co-organizer of Europe Day celebration and oblast Forum of school euroclubs of Lviv region. This year Sambir welcomed us again. 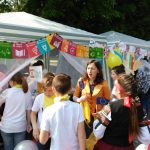 23 euroclubs from different rayons came to the celebration. The European tent city was organized in the central square near the ancient town hall. In the tent city people could learn everything about the European Union, educational opportunities in European countries. Local institutions of non-school education offered participants to take part in interesting master-classes. As always, the tent of body-art was very popular. 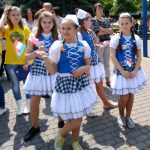 Euroclubs’ members thoroughly prepared to the celebration. Each school represented one of European countries. Pupils were dressed in national costumes, so parade in the central square of the city was very colorful and bright. Songs and presentations in different languages sounded in the Rynok square, guests danced to the national rhythms. Art groups of the city prepared very reach concert program. 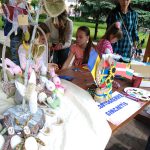 The quest on the city history and sustainable development was conducted in parallel. For those who didn’t participate in the quest, the Tourist Information Center organized the tour to historical sights of the city – ancient temple with St. Valentine’s relicts, organ hall, to the tower of the city hall. The celebration was finished by mass flash-mob, where pupils have laid out the abbreviations EU and UA.