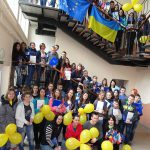 More then 60 pupils from twelve school euroclubs of Lviv oblast gathered in May 23-24, 2015 in children tourist base “Karpaty” near Skole to celebrate traditionally the Europe Day in Ukraine within IX Oblasr Forum. The Forum was organized by Lviv Oblast Institute of Postgraduate Pedagogical Education and Center of European Information of Lviv.

Despite not very favorable weather two days in the Carpathians passed very quickly and intensely. Pupils have played the game “Fall of the Spanish Empire”, during which they had a possibility to analyze the reasons that led to the collapse of powerful in its time state formation. As it was discovered, these reasons are very actual for our country, although not a century passed from that time. The game was conducted by Kateryna Partem, teacher of school euroclub “Zubryky” from Zubra.
Euroclubs’ members had a possibility to check their knowledges at brain-ring, organized by Tetyana Hrynkevych – teacher of school euroclub “Life” of Sambir School No8.

Original integration games, proposed by representatives of Cross-border Methodic Center, opened by Polish Community of Pedagogues and Animators KLANZA (Lublin, Poland) and Center of Educational Policy (Lviv) at the beginning of 2014 in Lviv, became the highlight of this year celebration. Coordinator of the Methodical Center Halyna Bondaruk together with Tetyana Hrynkevych and Nataliya Nayavko, who participated in methodical workshops of the project, organized real fairy of dances of different nations of the world. At the beginning pupils treated this point of the program a little bit cautiously but after the first dance it became impossible to stop them. The dance “Belgian” was the most popular.

Among other joyful and instructive fun activities – working with dialogue metaphorical cards, games on skills to speak and tell stories, on mutual trust and concentration, and also bright and exciting exercises with “Parachute”.