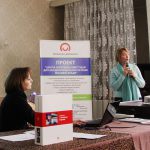 The final conference of “The school of drawing investments for public administration units of Western Ukraine” Project was held on December 16, 2015. This time representatives of all 12 cities participating in the project as well as Polish trainers and project organizers gathered in Lviv.

During two years the project has been implemented by the Malopolska Institute of Local Government and Administration MISTiA FRDL from Krakow in cooperation with Ukrainian partners – “Institute for Policy Studies” (Lviv) and Public center “Business initiatives” (Ivano-Frankivsk). The project was co-financed from the Polish Aid 2014/2015 Program by the Ministry of Foreign Affairs of the Republic of Poland.

Opening the conference the Project Director Wojciech Odzimek (MISTiA) briefly summarized the activity of those two years. That were – the round table with participation of foreign investors, four sessions of three-day trainings on issues of drawing investments for two groups of participants, two week-long study visits to Malopolska, workshops on development strategies of investment promotion of participating cities. Investment booklets in three languages are printed for each city, the training materials are included into the “Manual on drawing investments”, investment portal is developed in the framework of the project.

The conference consisted of two parts: plenary and panel discussion. At the first part the project participants from Burshtyn, Truskavets, Slavuta and Khotyn presented the investment potential of their cities; Polish trainers presented their regions; Chairman of the Board NGO “Business Initiatives” Galyna Vasylchenko stressed in her speech on issues of local economic development and drawing investments in the context of globalization.

The second part of the conference was held in the form of panel discussion with participation of city majors, heads of local development agencies and Polish experts. The discussion participants considered the main barriers faced by investors and tried to predict whether the administrative-territorial reform held in Ukraine can level these barriers.